What does America’s obsession with mean for teddy bear art? Although bear art occupies a small percentage of the fine-art marketplace, it is certainly a niche that is rising in prominence. Some of the foremost bear artists are well-known names in the art industry.

After a very inauspicious and shaky start, when the Sydney Organising Committee for the Olympic Games (SOCOG) tried to ban him, which took the intervention of Australia’s Deputy Prime Minister to save him when he told SOCOG to “back off” and let, arguably, the only Australian-made icon for the Millennium Games to stay in production, “Sidney the 2000 Olympics Bear” went on to win the prestigious Blue Ribbon at the 2000 Winter Wonderland Bear Show in Brisbane. He then went on to make me only the sixth living Australian bear artist to be so honoured when he was chosen by the world famous Dancing Bear Folk Center in the USA to be a featured bear in their Bear Museum. “Sidney” is now a closed edition, and somewhat world famous.

Cheap Wall Arts – another art supplier known for their discount canvas art, now are working with many artists to create multipiece teddy bear artworks for kids market. “There are a lot of teddy bear collectors out there; the key is to do something different for them,” Nick said. Their Executive Director Dora says the goal of their new bear artworks collection is “to serve as a bridge of understanding between two worlds, introducing teddy bear to the world of art.”

“[Teddy bear art] is art people can relate to,” Rein says. “We see people at the museum who are engaged or can relate to it and are excited about art. It brings back memories. It’s storytelling art.”

With more interest from consumers in teddy bear art, Fiorentino says the landscape among bear artists has changed since he started in the early 1990s.

“I started professionally at 16 years old, and back then, (bear art) started to take off,” says Fiorentino, now 31. “Back then, there wasn’t as much competition as is the case today.” 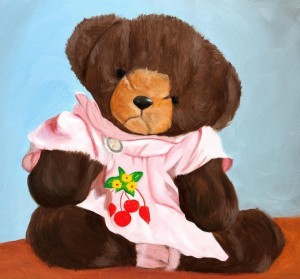